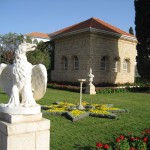 It’s official – the United Nations Educational, Scientific and Cultural Organization (UNESCO) has recognized two Baha’i Holy places in northern Israel as World Heritage Sites. These sacred sites of the Bahá’í Faith are the resting places of the founders of the religion, and join a list of internationally recognized sites like the Great Wall of China, the Pyramids, the Taj Mahal, and Stonehenge.

During a recent commemorative event held at Washington DC’s American University, Martin Peled-Flax, representing the Embassy of Israel at the event, expressed the appreciation of the Israeli government for what the Bahai’s have brought to Haifa, Israel’s third largest city. He said that Haifa had the potential to be just another industrial port city on the Mediterranean, with numerous warehouses, chemical plants and shipping docks. Instead, with the Baha’i Shrines and gardens located right in the middle of the city, it has been transformed into a metropolis of beauty, culture and spirituality. 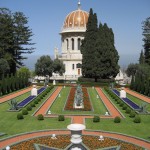 The two shrines, one near the recognized heritage site of Old Acre on Israel’s northern coast and the other on Mount Carmel in Haifa, are the resting places of Baha’u’llah and the Bab, the founders of the Baha’i Faith.

Speakers at the American University commemorative event gave details of the significance of these sacred sites and their history. They showed how over the course of a century, the world center of the Baha’i Faith has evolved from a small prison cell where Baha’u’llah, the founder of the religion, was incarcerated, to now comprise hundreds of acres of beautified gardens attracting hundreds of thousands of visitors from around the world every year. 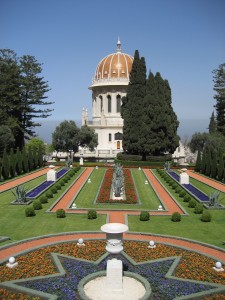 A United Nations committee meeting has determined that two Bahá’í shrines in Israel possess “outstanding universal value” and should be considered as part of the cultural heritage of humanity.

The decision by the UNESCO World Heritage Committee means that the two most sacred sites for Bahá’ís – the resting places of the founders of their religion – join a list of internationally recognized sites like the Great Wall of China, the Pyramids, the Taj Mahal, and Stonehenge.

Like Baha’is around the world, members of the Arlington Baha’i community are celebrating the news. Baha’is visit the shrines as part of pilgrimage to Haifa and Acre. 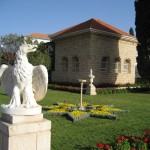 The World Heritage List also includes places of global religious significance like the Vatican, the Old City of Jerusalem, and the remains of the recently destroyed Bamiyan Buddhist statues in Afghanistan.

The Bahá’í shrines are the first sites connected with a religious tradition born in modern times to be added to the list, which is maintained by UNESCO, the United Nations Educational, Scientific and Cultural Organization