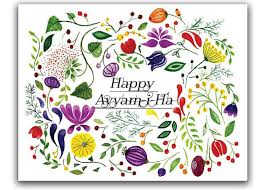 The following excerpt from Wikipedia explains the upcoming holiday period of Ayyám-i-Há in the Bahá’í calendar:

“Ayyám-i-Há refers to a period of intercalary days in the Bahá’í calendar, when Bahá’ís celebrate the Festival of Ayyám-i-Há. The four or five days of this period are inserted between the last two months of the calendar (Mulk and `Alá’). The length of Ayyám-i-Há varies according to the timing of the following the vernal equinox so that the next year always starts on the vernal equinox.

“The 2018 dates for this observance are from sunset on Sunday, February 25 to sunset on Thursday, March 1.

“The nineteen months of the Bahá’í calendar are named after the attributes of God. Ayyám-i-Há, which means the “Days of Há” — Há is the Arabic letter corresponding to the English H— commemorates the transcendence of God over his attributes, since its name “Há” has been used as a symbol of the essence of God in the Bahá’í Holy Writings. Under the Arabic abjad system, the letter Há has the numerical value of five, which is equal to the maximum number of days in Ayyam-i-Há.

“During the Festival of Ayyám-i-Há Bahá’ís are encouraged to celebrate God and His oneness by showing love, fellowship and unity. In many instances Bahá’ís give and accept gifts to demonstrate these attributes, and it is sometimes seen as a ‘Bahá’í Christmas,’ but many Baha’is only exchange small gifts because gifts are not the main focus. It is also a time of charity and goodwill and Bahá’ís often participate in various projects of a humanitarian nature.”

Fun Bahá’í-themed gifts may be found at online stores such as Delighted Hearts, Mine Rich in Gems, and A Tiny Seed.