Former Washington, D.C. resident, Shastri Purushotma, offered the following thoughts on April 8, on Huffington Post about the upcoming 150th anniversary of Ridván, the 12-day celebration of Bahá’u’lláh’s Announcement of His Revelation.

“On April 21 this year, the Baha’i community will celebrate the 150th anniversary of the day when Baha’u’llah, the founder of the Baha’i Faith, first publicly announced His mission in a garden in Baghdad, thus beginning the Baha’i community that today comprises virtually all the races of humankind in more than 200 countries and territories.

“In a sense, the global festivities involving people of thousands of ethnic backgrounds is representative of the key message of the Baha’i Faith: that a time of happiness has arrived for the entire human race as it gradually moves from a state of collective adolescence to a stage of maturity and wholeness. “We desire the good of the world and the happiness of the nations,” said Baha’u’llah to Edward Granville Browne, the Cambridge University scholar who interviewed Him in 1890, “that the bonds of affection and unity between the sons of men should be strengthened … what harm is there in this? … these fruitless strifes, these ruinous wars shall pass away, and the ‘Most Great Peace’ shall come.” These words provide an outline of the aim of Baha’u’llah’s teachings and the work of the Baha’i community today. 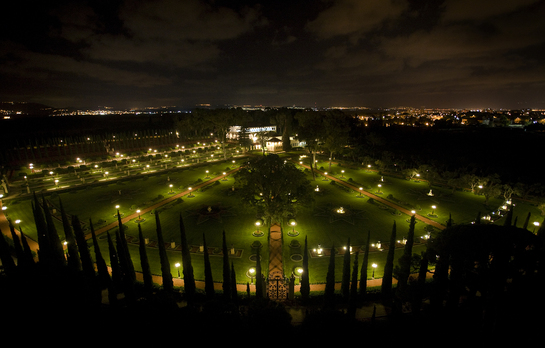 The Shrine of Baha’u’llah just north of Akka, Israel
“Mirza Husayn Ali was a prominent follower of the Babi religion that had begun in Shiraz, Persia 19 years earlier, and was known by members of that community as “Baha’u’llah” (Arabic for “Glory of God”). Central to the teachings of the Babi religion was the expectation of the imminent appearance of another Divine Messenger who would fulfill many of the promises implicit in the religion — not dissimilar from expectations in Hinduism, Judaism, Buddhism, Zoroastrianism, Christianity and Islam regarding a future time of completion and fulfillment.

“On April 21, 1863, as He was about to be exiled from Baghdad to Constantinople, Baha’u’llah stayed for 12 days in a garden in Baghdad known as the “Ridvan (Paradise) Garden” and it was here that He let members of the Babi community gathered know that He was the promised one they were expecting.

“This was a time of great joy for the Babis, who had experienced in the preceding years the execution of the Founder of their religion (known as “The Bab”) and the slaughter of more than 20,000 members of their community. One of those present in the Ridvan garden left an account of the scene that gives a sense of the occasion:

“Every day, ere the hour of dawn, the gardeners would pick the roses which lined the four avenues of the garden, and would pile them in the center of the floor of His (Baha’u’llah’s) tent. So great would be the heap that when His companions gathered to drink their morning tea in His presence, they would be unable to see each other across it.”

“Baha’u’llah described this occasion as the “Most Great Festival,” the “King of Festivals,” and the “Festival of God.” Baha’is celebrate the first (April 21), the ninth (April 29) and the last (May 2) days of the 12-day Ridvan festival as holy days and where possible take them off work in honor of the occasions. The significance of each is the following: the first day of Ridvan is when Baha’u’llah entered the garden and announced His mission, the ninth is when His family joined Him, and the 12th was His departure from the garden and the continuation of the journey of exile to Constantinople. 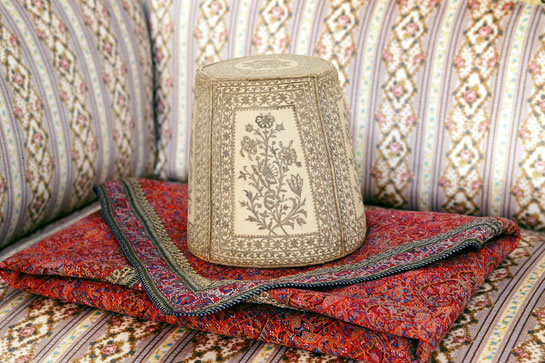 A “Taj” or head-dress worn by Baha’u’llah
“In the years following this announcement to a small group of Babis in the Ridvan garden, and despite the restrictions of being a prisoner and exile, Baha’u’llah wrote to the rulers of the world of the time and outlined a plan for the peaceful unification of the human race. Letters were written to Napoleon III of France, Kaiser Wilhelm I of Germany, Queen Victoria of England, Sultan Abdul Aziz, Pope Pius IX and others. Despite being ignored at the time, some of the ideas in these letters were partially implemented several generations later by U.S. Presidents Woodrow Wilson and Franklin D. Roosevelt immediately after World Wars I and II.

“It is always beneficial for people of any or no religious background to learn more about the Founders of the world’s religious systems, as such knowledge helps one better understand his or her own beliefs as well as connect with others. Readers will find that learning about Baha’u’llah is particularly fascinating because, in addition to restating the essential moral teachings of all the world’s great religions, He also wrote about current and future global and societal issues such as statesmanship, collective security, the role of the news media, international language, economic issues, life elsewhere in the universe, medicine, dreams, the environment, energy, global governance, agriculture, education and many others.

“If you haven’t read Baha’u’llah’s writings before, perhaps you might find that one very enjoyable way to spend the beautiful spring days between April 21 to May 2 this year is to sip some morning tea (or cappuccino, or any morning drink of your choice) with a pile of roses nearby and some of Baha’u’llah’s works and see what that group in Baghdad 150 years ago was so excited about.”