Individuals who were lucky enough to attend Arlington’s Prayer Station on September 14 were also treated to a preview of the Prayer Station’s musical act on October 19 – Alex Kruszewski. 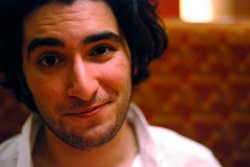 Alex has had a passion for music and performance for as long as he can remember. Exploring the mediums of Dance, Theatre, Literature, Musical Performance, and Composition throughout his youth and schooling, he loves sharing creativity with others and using art as an avenue for social change. His creative and performance credits include commissions from the BalletProject@VirginiaTech, Ensemble roles in Threatre of the Stars’ ’08 touring production of “Les Miserables,” and principle roles in a variety of theatre productions and choral works performed over the past several years. Most of all, he looks forward to sharing his music with you!

Contact the host of the Arlington Prayer Station for more details on Alex’s upcoming performance!