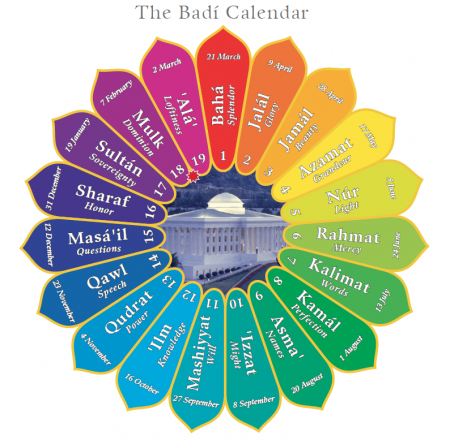 The Baha’i year contains 19 months of 19 days each (361 days), with the addition of “Intercalary Days” (four in ordinary and five in leap years) between the eighteenth and nineteenth months to adjust the calendar to the solar year. Each month is named after an attribute of God.

The Baha’i New Year falls in line with the March equinox (March 21). The Baha’i Era began with the year of the Bab’s declaration (1844 A.D.). Each Baha’i community holds a Nineteen Day Feast on the first day of each Baha’i month. The Feast has spiritual, administrative, and social functions and is the principal gathering of Baha’is of a particular geographic region, or principality. Baha’i days begin at sunset one day and end at sunset the next day. The Nineteen Day Feast is generally held in the evening on the day before the first day of the Baha’i month according to the Gregorian calendar, the calendar used primarily by western and/or non-Islamic countries.

Reference:
The official website of the National Spiritual Assembly of the Baha’is of the United States