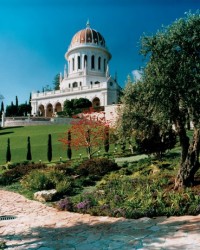 “Verily the resplendent Light of God hath appeared in your midst, invested with this unerring Book, that ye may be guided aright to the ways of peace…” – The Báb

It was with these words that The Báb (translation from Arabic as “The Gate”) declared his station as the one who would declare the Promised One, Bahá’u’lláh, had arrived.

The Báb’s 1844 declaration came at a time when Christianity and Islam were abuzz with anticipation of the return of God’s manifestation. Christians were expecting the return of Jesus. Islam awaited “The Lord of the Age”. Both expectations were fulfilled when The Báb revealed that “Him Whom God shall make manifest” was now in their midst. The Báb’s task can be compared to the role of John the Baptist, the forebearer of Jesus Christ. The Báb was Bahá’u’lláh’s messenger whose principal assignment was to prepare the world for Bahá’u’lláh’s arrival. The founding of the Bábi Faith is viewed by Bahá’ís as being established with the founding of the Bahá’í Faith with its purpose fulfilled as Bahá’u’lláh declared in 1863 that He was the Promised One foretold by the Báb.