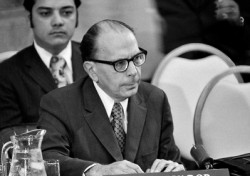 Professor Pohl’s 1993 report to the UN Commission on Human Rights was notable for its disclosure of the so-called “Baha’i Question” memorandum, a previously secret 1991 letter – issued by the Supreme Revolutionary Cultural Council in Iran – that established a national policy for dealing with Iran’s Baha’is, setting limits on their educational, economic and cultural activities.

Read more about the passing of Professor Pohl here.