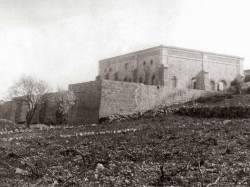 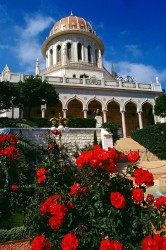 March 21st marks the first day of Bahá (Splendor) which first month of the Bahá’í calendar. After breaking the fast together on Friday March 20th, on March 21st the Arlington community gathered together to celebrate the first Nineteen-Day Feast of the new year. Nineteen-Day Feast is a centerpiece of the Bahá’í Community. The Bahá’í calendar consists of 19 months, with 19 days in each month. Therefore at the beginning of each month, Baha’is all over the world gather together for a “Feast.” There are three portions to every Nineteen-Day Feast, a devotional part during which prayers are read, an administrative portion during which the affairs of the community are discussed, and a social portion. ‘Abdu’l-Baha stated:

“As to the Nineteen Day Feast, it rejoiceth mind and heart. If this feast be held in the proper fashion, the friends will, once in nineteen days, find themselves spiritually restored, and endued with a power that is not of this world.”

We invite you to enjoy a short slideshow of pictures taken this weekend in Arlington from the Feast of Bahá. 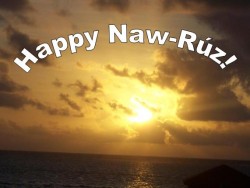 March 21st is Naw-Rúz, or New Years for Bahá’ís. The term “Naw-Rúz” literally means “new day,” and it marks both the beginning of the Bahá’í calendar and an end to the days of fasting. There are two events happening locally, and we invite you to come and celebrate with us. On Friday March 20th at 7:00 pm the Bahá’ís of Arlington will be joining with the Bahá’ís of Alexandria at the Alexandria Bahá’í center, located at 5400B Eisenhower Ave. You are invited to enjoy dinner and music as we ring in the new year.

If you’d rather come to a smaller more intimate gathering, we will also be having a devotional gathering in Arlington at 7:00pm on Friday March 20th. The gathering will be preceded by dinner including lentil soup, Persian saffron rice, salad and more! This will be a chance break the fast together on the last day of the year, and enter into the new year together with prayers.

“O Pen of the Most High! Say: O people of the world! We have enjoined upon you fasting during a brief period, and at its close have designated for you Naw-Rúz as a feast.”  (Bahá’u’lláh)

For more information regarding these events please contact us. We hope to see you there, and we wish you a happy and joyous new year! Happy Naw-Rúz!

We invite you to participate in a live online radio program on the Bahá’í Faith in Iran that will take place Tuesday March 17th on World Focus, PBS’s nightly international news program. According to the World Focus website, this program “will explore the background and history of the Baha’i faith, religious persecution in Iran and the arrest and forthcoming trial of the seven Baha’i leaders.” You are invited to submit questions for the show here.

You can tune into the live show on Tuesday, March 17 at 7:30 p.m. EST at http://www.blogtalkradio.com/worldfocus or listen after the fact at http://worldfocus.org/blog/tag/tune-in/.