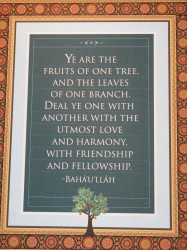 The Bahá’ís of Arlington invite you to join them for prayers on behalf of the seven Bahá’ís facing trial in Iran. Please check this site for updates of prayer sessions, or contact us if you have any questions.

The situation is urgent, but the persecution in Iran has been occurring since the Bahá’í Faith began. Over one hundred years ago, as a prisoner of the Ottoman empire in Acre, in what is present day Israel, Bahá’u’lláh wrote:

“We desire but the good of the world and the happiness of the nations; yet they deem Us a stirrer up of strife and sedition worthy of bondage and banishment…. That all nations should become one in faith and all men as brothers; that the bonds of affection and unity between the sons of men should be strengthened; that diversity of religion should cease, and differences of race be annulled — what harm is there in this?”

Unfortunately over a century later, the situation of the Bahá’ís in Iran is still dire. They are still being persecuted for believing in this message of brotherly love and unity. Please join us as we pray for the safety of these innocent believers and for the exercise of religious freedom in Iran.

Deeply concerned about the plight of their Bahá’í brothers and sisters in Iran, the Arlington Bahá’í Community invites you to gather for a planned series of prayer meetings and conference calls.

We invite friends of all faith backgrounds to come together and pray with us. We will pray for protection and healing, for understanding and love, for compassion and justice. On Valentine’s Day, when so many are talking about love, let us call to mind the words of ‘Abdu’l-Bahá, the son of Bahá’u’lláh:

“I charge you all that each one of you concentrate all the thoughts of your heart on love and unity. When a thought of war comes, oppose it by a stronger thought of peace. A thought of hatred must be destroyed by a more powerful thought of love.”

For the most timely and up-to-date information regarding the plight of the Bahá’í in Iran please visit iran.bahai.us.

Wednesday, February 11 the Honorable Frank Wolf of Virginia stated the following in the Congressional Record:

“Madam Speaker, I would like to bring to my colleagues’ attention some deeply disturbing news coming out of Tehran. Tehran’s deputy prosecutor recently announced that the revolutionary court will hear the cases of seven members of the Bahá’í faith accused of spying for Israel. The continued systematic persecution of the Bahá’ís by the tyrannical government of President Mahmud Ahmadinejad is unacceptable and must stop. I ask that a report from the Agence France Press be inserted into the record, as well.”

Here is the report from the Agence France Press.

Thank you Congressman Wolf. You are right this is very disturbing and is completely unacceptable. More than nine months ago – on May 14, 2008 – six Bahá’í leaders were arrested in Iran. They have been denied access to legal counsel. Those six and another individual who was arrested in March comprised the entire membership of a national-level coordination group that helped see to the minimum needs of Bahá’ís in Iran. For more information concerning that arrest please see our earlier post.

These arrests were condemned by The United States Commission on International Religious Freedom, The US 2008 Congress, the White House, the President of the EU, the United Nations, many newspapers from international publications such as the Wall Street Journal, CNN and BBC to our local newspaper The Arlington Connection.

END_OF_DOCUMENT_TOKEN_TO_BE_REPLACED 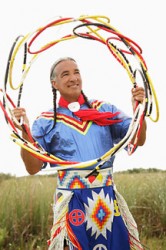 Kevin Locke, an internationally recognized Native American dancer and preeminent player of the indigenous flute, will perform Saturday, February 14, 2009 at the at the Northern Virginia Bahá’í Center. He is a visionary Hoop Dancer, the preeminent player of the indigenous Northern Plains flute, and a traditional storyteller, cultural ambassador, recording artist and educator. Originally from South Dakota, raised on the Standing Rock Reservation, he has performed and lectured in nearly 80 countries.

In rhythm with the beating of a drum, Kevin creates images of life emerging from the darkness of winter into the exuberance of spring. Seamlessly flowers, butterflies, eagles, stars, the sun & moon merge into each other. This traditional dance is a celebration of the annual rebirth of nature, but for Kevin it is even more: “The hoops represent Unity, while the four colors of the hoops black, red, yellow and white represent the four human races, the four directions, four seasons, four winds and more. As the Dance concludes, all 28 hoops are interlocked in a spherical union illustrating the interdependence we all share and cannot truly live without.” 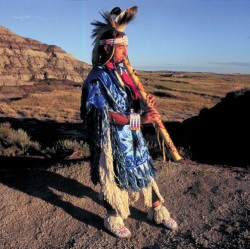