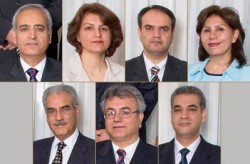 As Iran continues its practice of denying human rights to millions of its citizens … students, women, journalists, bloggers, and religious minorities … the situation in Iran has turned dangerous for the Bahá’í community, the largest religious minority in Iran.

The deputy Tehran prosecutor has announced that seven imprisoned Bahá’í leaders (seen in the photo) will be going on trial the week of February 15 on completely trumped-up charges, including propaganda against the Islamic republic and espionage for Israel, a capital offense in Iran.

The Nobel Laureate, Shirin Ebadi, is their lawyer, but has been prevented from meeting with the Bahá’í leaders and from having access to their files.

The National Spiritual Assembly of the United States urgently calls on each Bahá’í to immediately take the following actions:

www.house.gov and type in your Zip Code + 4
www.senate.gov and select your state

Timely updates are online at the official blog, Persecution of Bahá’í’s in Iran, including links to government statements and media coverage.