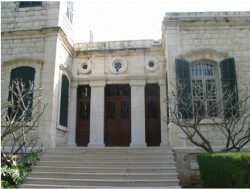 On November 28 at 1:00am, members of the Baha’i Faith throughout the world will commemorate the passing of ‘Abdu’l-Bahá, the eldest son of Bahá’u’lláh. He was born on May 23, 1844 in Tehran and given the name `Abbás. Yet the name that he preferred was ‘Abdu’l-Bahá’ which means ‘Servant of Bahá’. As a young child he accompanied his Father in exile and was a prisoner for most of his life. In 1908, as a result of the Turkish revolution, all political and religious prisoners of the Ottoman Empire including ‘Abdu’l-Bahá were released. In 1911 and 1912 he traveled to Europe and North America to spread his Father’s teachings concerning the coming of a new day and the unity of all mankind. He was knighted by Queen Victoria for his humanitarian services and spent his life caring for the sick and the needy.

Before Bahá’u’lláh passed away in 1892 He appointed ‘Abdu’l-Bahá as the Center of His Covanent and the sole interpreter of His writings. Abdu’l-Bahá died in his house in Haifa (pictured) on November 28, 1921 at the age of 77. Over 10,000 mourners, representing every class, religion and race in Palestine attended his funeral. Excerpts of some of the speeches given at his funeral by the various religious leaders can be read here.

We invite you to join us here in Arlington as we commemorate his passing. Starting at 9:00pm on Thursday November 27th, we will be showing two films, including the new full-length documentary “The Promised One of All Ages.” The commemoration with prayers and devotional readings will be at 1 am. Please contact us for more information or for directions to this commemoration. Some of ‘Abdu’l-Bahá’s writings are available here.