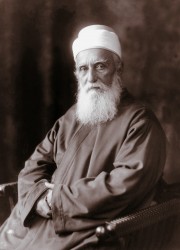 A covenant is a binding agreement between two parties. In the religious sense a covenant is an agreement between God and man, whereby God requires of man to behave in a certain way in return for which He guarantees certain blessings. Bahá’ís recognize two kinds of covenants, a Greater Covenant and a Lesser Covenant.
The Universal House of Justice, the supreme governing body of the Bahá’í Faith, describes the two covenants in the following manner:

“There is, for example, the Greater Covenant which every Manifestation of God makes with His followers, promising that in the fullness of time a new Manifestation will be sent, and taking from them the undertaking to accept Him when this occurs. There is also the Lesser Covenant that a Manifestation of God makes with His followers that they will accept His appointed successor after Him. If they do so, the Faith can remain united and pure. If not, the Faith becomes divided and its force spent. “

Bahá’ís believe that Bahá’u’lláh is the latest Messenger of God, and through Him, God’s promise to mankind, His Greater Covenant is renewed. When Bahá’u’lláh passed away on May 29, 1892, in His will and testament He appointed His eldest son `Abdu’l-Bahá as the center of His covenant and the sole interpreter of His writings. In addition to being the center of his Father’s covenant, `Abdu’l-Bahá was the embodiment of every Bahá’í ideal, the incarnation of every Bahá’í virtue and provide a perfect example of how to live according to the Bahá’í teachings. Therefore every year on November 26th, Bahá’ís all over the world celebrate The Day of the Covenant. This is a day for us to celebrate the life of `Abdu’l-Bahá as well as the Covenant of Bahá’u’lláh which has ensured the unity of the Bahá’í Faith.