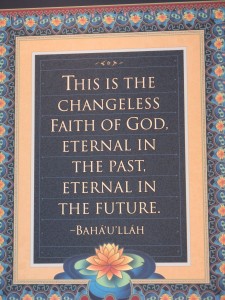 On the 12th of November 1817 in Tehran, Iran a young child was born. His given name was Hysayn Ali, but He became known as Bahá’u’lláh, a title that means “the Glory of God” in Arabic. Bahá’u’lláh came from long and illustrious lineage, and His father, Mirza Buzurg-i-Nuri was a wealthy government minister. When his father passed away, Bahá’u’lláh was asked to follow in his footsteps, but He declined the high-ranking position and instead lead a life where he was a haven and a refuge for the poor and needy and a kind father to the orphans. These heavenly qualities manifested by Him from childhood made Him the object of adoration and love among people who heard His name and came in touch with His vibrant personality.

‘Abdu’l-Bahá, said the following concerning his Father’s childhood: “… Bahá’u’lláh, belonged to the nobility of Persia. From earliest childhood He was distinguished among His relatives and friends.… In wisdom, intelligence and as a source of new knowledge, He was advanced beyond His age and superior to His surroundings. All who knew Him were astonished at His precocity.”

In 1863 Bahá’u’lláh announced that He was the Promised One that all mankind had been waiting for. To find out more about the life of Bahá’u’lláh we invite you to join us for a celebration of His birth. The Arlington Bahá’í community will be celebrating the Birth of Bahá’u’lláh on Tuesday, November 11 at 7:30 p.m at the Alexandria Bahá’í Center located at 5400B Eisenhower Ave. Please contact us for more information or call (703) 548-0929.