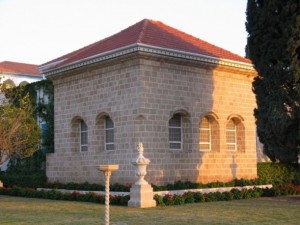 Early in the morning of May 29, 1892, Bahá’u’lláh passed away in Bahji, just north of Acre in what is today Israel. Bahá’u’lláh was laid to rest on this same property, which now is the holiest place in the world for all Bahá’ís.

He was 74 years old and was still a prisoner of the Turkish government. He was exiled and imprisoned for His teachings of love and unity towards all mankind. In His own words He stated:

“The fundamental purpose animating the Faith of God and His Religion is to safeguard the interests and promote the unity of the human race, and to foster the spirit of love and fellowship amongst men.”

In Israel hundreds will gather at 3:00am on May 29th at His burial site to commemorate the Anniversary of His passing. Elsewhere in the world Bahá’ís will also gather in the early hours of the morning to say prayers. If you are interested in joining us in Arlington please email the administrator.